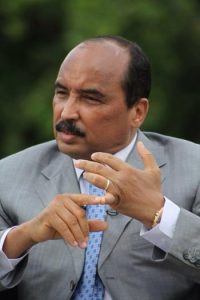 Tension has risen between the two presidents after Birame ould Dah ould Abeïd, leader of the anti-slavery movement IRA (Initiative for the Resurgence of the Abolitionist Movement) was given air time on Burkina Faso’s public channel.

The slavery phenomenon has been officially abolished in the North African country since 1981 but activists, including Birame, claim unhuman trade continues in Mauritania.

Birame is also opposed to the regime of President Ould Abdel Aziz, in power since 1998. Speaking from Abidjan, Côte d’Ivoire, last month, the anti-slavery leader vowed to bring down the regime which he said “has privatized the country and turned it into a cash cow for the President’s family and friends.”

The Mauritanian President, in a telephone conversation, scolded Kaboré for letting “a gangster and a criminal” criticize him on the Burkina Faso’s state channel, reports say.

Kaboré, according to media reports, indicated that he himself came to power through a revolution and the constitution neither allows him to supress freedom of speech nor freedom of movement.

The Burkina leader reportedly added that the constitution warrants freedom for public and private channels and as for entry into the country, migration services at borders decide who enters or not.

According to media, these explanations did not convince the Mauritanian President who could not fathom how his critic was allowed on a state TV channel.

Kaboré has reportedly told his counterpart that Birame was hosted by US State Department and has received many official accolades from the UN Secretary General.

Heads of foreign missions in Mauritania regularly visit him but never in time Nouakchott ever summoned them as far as we know, Kaboré noted.