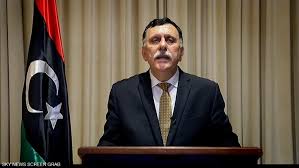 Fayez Al-Sarraj, Prime Minister of the UN-backed Government of National Accord (GNA) has vowed to restore order in his country after the coup attempt staged lately by rival Libyan groups to capture key government buildings.

Sarraj, who was in Tunisia during the coup attempt debating political solutions with some rebel factions, called on loyal militia units to arrest the plotters, saying their actions will add more chaos in the country.

The plotters have proclaimed the return of a former administration, the national salvation government, in what has so far been a bloodless takeover. Coup leader Khalifa al-Ghwell, a former Prime Minister, declared the GNA was now void after repeated failures.

“The presidential council was given chances one after another to form the government, but it fails … and has become an illegal executive authority,” he said.

Six months after arriving in Tripoli, the GNA has failed to establish a security force of its own, and with no police or army units in the capital, the city’s potent militias have emerged as kingmakers in the power struggle between rival governments.

The struggle is itself part of a wider war, between militias in parts of the capital and western Libya against those loyal to the elected parliament based in the eastern town of Tobruk.

This Parliament has so far refused to work with the GNA, and its hand was strengthened in September after its army commander, Khalifa Haftar, captured the country’s key oil ports giving it control of most of the oil industry.

The UN envoy Martin Kobler condemned the attempt to seize the headquarters of the high council of state, saying that “such actions … will generate further disorder and insecurity and must end for the sake of the Libyan people.”

Since the fall of the regime of former ruler Muammar Gaddafi in 2011, Libya has plunged into chaos, with no central government. The Islamic State has taken advantage of the situation to conquer vast swaths of land in the country, mostly in coastal regions where many criminal gangs indulge in illegal migrant trafficking.

Rival groups signed a political accord that hashed out a Government of National Accord (GNA) led by Serraj. Despite strong and vast backing from the international community, the GNA is still struggling to assert its authority challenged by Islamists and armed groups