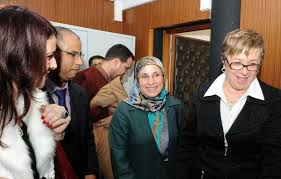 Proportion of Women in Moroccan Parliament Rises to 21%

Following the October 7 general elections, women’s percentage at the House of Representatives slightly rose to account for 21% of seats compared to 17% in the 2011 elections.

The number of seats occupied by women in the Moroccan parliament stands at 81 out the 395 total seats, of whom 71 made it to the House of Representatives thanks to a quota system that encourages women’s representation.

The party that emerged victorious in the elections, the Islamist Justice and Development Party (PJD) has the majority of women’s representation in Parliament with 18 seats followed by liberal Authenticity and Modernity Party (PAM) with 14 women seats, the Istiqlal Party (PI) with 7 seats, the National Rally for Independents (RNI) with 6 seats, the Popular Movement (MP) with 5 seats, the Socialist Union for Popular Forces (USFP) with 4 seats and the Party of Progress and Socialism (PPS) with 3 seats.

Nearly 30 political parties run for these parliamentary elections, the 10th since 1965, and the second under the new Constitution of 2011, but the race was marked by a fierce rivalry between two titans, the Islamist Party for Justice and Development or PJD as it is known by its French acronym, which led the outgoing governmental coalition, and the opposition liberal and modernist party, the Party of Authenticity and Modernity (PAM.)

According to the final results announced last Saturday, after the count of the local and national lists, the PJD secured 125 seats, while its arch rival, the PAM won 102 seats.

The fragmentation of Morocco’s political landscape makes no party able to win an outright majority. To secure the 210 majority of seats, the PJD needs to form a coalition with at least 3 parties. The task may put the PJD on a rocky road to negotiate the distribution of ministerial portfolios and compromise on their party’s policies to make it in tandem with its partners in the future government.

North Africa Post's news desk is composed of journalists and editors, who are constantly working to provide new and accurate stories to NAP readers.
NEWER POSTMorocco on the Global Gas Map by 2019
OLDER POSTTunisia Still Suffering from Fallout of Terrorist Attacks