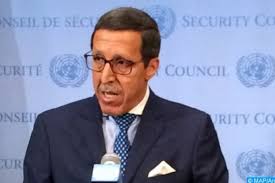 Algeria’s responsibility in prolonging the Sahara conflict was decried by Morocco’s Representative at the UN in New York Omar Hilale, who deplored that Algiers continue to block efforts aiming at reaching a lasting political solution to the Sahara dispute.

Hilale, speaking before the UN General Assembly’s Fourth Committee, presented arguments showing the invalidity of the observer status of Algeria in the Sahara dispute. He said Algiers is not qualified to be an observer in light of its direct involvement in perpetuating the Sahara conflict through its direct diplomatic and military support for the Polisario separatist front which it has created in the first place.

To show Algeria’s vested interests in the Sahara and its manipulation of the Polisario to achieve its goal of having an outlet on the Atlantic, Hilale recalled Algiers proposal to the then UN Secretary General’s personal envoy James Baker concerning the partition of the Sahara in 2001.

Algeria continues to fund and support diplomatically and military the Polisario militias which it hosts in the region of Tindouf since the 1970s.

The Polisario have been using Algerian territories as a rear base for their guerilla warfare against Morocco until the UN-brokered ceasefire agreement in 1991.

In 2007, Morocco put forward the autonomy initiative after the organization of a referendum proved to be unfeasible in view of disagreements over who is eligible to vote. The autonomy initiative, which has been internationally endorsed as a credible solution, offers the Saharan population exclusive powers with regards to managing local affairs within the framework of Morocco’s sovereignty and territorial integrity.

The Polisario and its mentor Algeria continue to stick to obsolete positions reminiscent of the Cold War era leading to the perpetuation of the conflict and the prolonging of the suffering of the population held in the Polisario-run camps in southwestern Algeria.