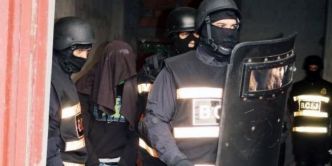 The two suspects were arrested in the southern cities of Tan Tan and Guelmim. Investigations by the Central Bureau of Judicial Investigations show that they were seeking to make explosives through obtaining products and devices used for that purpose.

The statement added that one of the suspects is the brother of a member of the recently dismantled all-female cell.

Last week, Morocco’s Central Bureau of Judicial Investigations (BCIJ) busted an all-female terrorist cell in an operation that resulted in the arrest of 10 young women, suspected of plotting suicide bombings across the country.

The cell, including minors, was active in recruiting and indoctrinating women in several parts of the country and tried to “obtain the chemicals used to make explosive belts” in order to carry out attacks on “vital installations.”

Some of the women had close relationship or family ties with Moroccan fighters who had joined Daesh in Iraq and Syria.