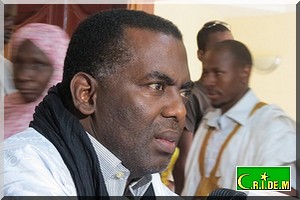 Leader of the anti-slavery movement IRA (Initiative for the Resurgence of the Abolitionist Movement) has slammed President Mohamed Ould Abdel Aziz’s regime for looting the Mauritanian people, reports say.

“Their only realization is illicit enrichment, division of Mauritanians, and ideological, ethnical and religious indoctrination of communities,” Biram Dah Abeid said in an address before members of the Mauritanian community in Abidjan, Côte d’Ivoire.

The Mauritanian regime, held by a handful of soldiers, seeks to turn Mauritania into a cash cow for some families, Biram argued, adding that Abdel Aziz’s regime is a racist regime, which has moved to deprive Mauritanians (indigenous Mauritanians) of their nationality and citizenship.

The regime has implemented ethnic cleansing policies that have sidelined Mauritanians of black color, the activist said.

Biram called all Mauritanians, even those close to the regime, to rise up and overthrow President Ould Abdel Aziz and his ring.

The anti-slavery champion re-iterated his commitment and that of his movement in combatting and bringing down the Mauritanian regime.

The activists were arrested late June and early July for orchestrating riots in capital Nouakchott. A court in August sentenced them to between 3 and 15 years in prison following a contested trial, decried as unfair.