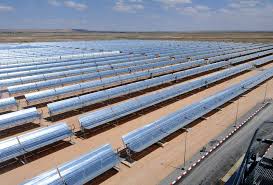 Morocco seems firmly resolved to reach the goal it set to cover more than half its energy needs by 2030 from renewables.

In this vein, King Mohammed VI, who supervises the national program for the development of renewable energy, chaired on Monday in Tangier a working session devoted to the energy sector in general and to the renewable energy program in particular.

From the outset, King Mohammed VI “underlined the importance of this major program that will enable Morocco to achieve effectively energy independence,” a statement from the Royal Office said.

The meeting was also an opportunity to “take stock of the institutional and operational convergence that should govern the sector,” the statement said.

The sovereign took note of the steps taken so far at the institutional level, embodied in the promulgation of new laws governing MASEN, the ONEE and the ADEREE (national agency for the development of renewable energy and energy efficiency.) The laws were published in the Kingdom’s official gazette issued on Monday.
At the operational level, it was noted that the renewable energy projects were being effectively transferred to Masen.

The King was informed of the arrangements made by operators. These arrangements “fall in line with the goal to raise the share of renewables in the national energy mix to 42% by 2020,” the statement of the Royal office said, adding that King Mohammed VI reiterated his instructions in order to fulfil the objective to bring this share to 52% in 2030.

To fulfil this ambitious goal, “the next step will consist in a strategic programming that will reflect clearly the expected synergies in this area,” the statement said.

As part of the effort to reach the ambitious goal to generate 42 percent of its energy from renewable sources by 2020 and 52 percent by 2030, Morocco, earlier this year, inaugurated in Ouarzazate Noor 1, the first phase of what will become the largest concentrated solar power plant in the world. At completion, the facility is expected to produce 580 MW of clean electricity for more than one million people.

These efforts were hailed by the World Bank, which said that Morocco “is setting an example by designing and embracing green growth strategies across sectors.”

The 2016 Climate Performance Index also ranked Morocco among the top 10 countries making the most progress in combating climate change and number one among developing countries.