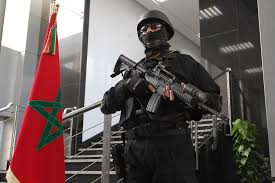 Moroccan security services said Wednesday they have averted and foiled terrorist attacks in the North African country thanks to the recent arrest of three extremists affiliated to ISIS terror organization.

The three captured men were active in the Northern Moroccan cities of Tangier and Mdiq, said a press release issued by the Ministry of the Interior.

According to investigators, the cell was planning to carry out a series of bloody attacks targeting peace and stability of Morocco, a major ally of the West in the region, which is waging a tireless war against terrorism.

The three jihadists were also planning to create an ISIS province (Wilayat) in Morocco, said Morocco’s Central Bureau of Judicial Investigation, the judicial part of the Moroccan domestic intelligence service.

The ringleader of the cell was assigned by a senior ISIS operative to prepare and carry out attacks against Morocco’s strategic sites including security buildings, hotels, tourist attractions and foreigners.

Investigators say the cell leader had already acquired some chemical products and lab equipments necessary for making explosives. The dismantling of this cell is part of the tireless war waged by Moroccan authorities against Islamist extremists and fanatics.

As the international coalition intensified its airstrikes against the terrorists in Iraq and Syria, the extremist group started moving to North Africa and particularly to Libya where the jihadists have enhanced their influence and presence.

Morocco has worked out a comprehensive counterterrorism strategy that includes vigilant security measures, regional and international cooperation, and counter-radicalization policies.

In 2015, Morocco’s counterterrorism efforts mitigated the risk of terrorism but the country continues to face threats, largely from numerous small, independent violent extremist cells. Moroccan authorities have dismantled multiple groups with ties to international networks that included ISIS and Al Qaeda in the Islamic Maghreb (AQIM).