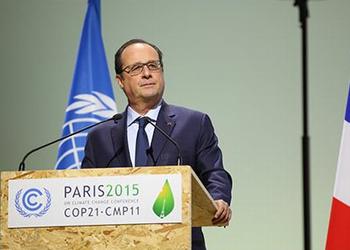 Speaking to the media following a key meeting on renewable energy, held at the initiative of African countries, President Hollande said France stands ready to make the coming November UN meeting on climate in Morocco successful.

“We trust Morocco can host the COP22,” the French President said, calling for massive mobilization for the event to take place in Marrakesh, from November 7 to 18.

Hollande announced earlier this month, following a phone conversation with King Mohammed VI, that he would take part in the upcoming event.

During the phone conversation, the two heads of State had expressed satisfaction at the bilateral cooperation and coordination to make of the Moroccan chairmanship of the Cop22 a success.

Morocco is taking over the chairmanship of the UN Summit on climate from France which hosted the event last year in Paris.

Moroccan authorities have rolled up their sleeves to make the High mass memorable and successful.