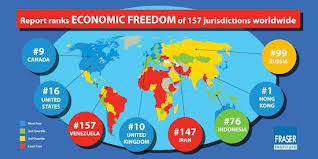 Algeria Lags Far Behind in ‘Economic Freedom of the World’ Ranking

The 2016 Economic Freedom of the World Report issued by the Canadian Fraser Institute pointed out to the plummeting economic freedom in Algeria, which ranked 151st among 159 surveyed countries.

The report measures economic freedom including levels of personal choice, ability to enter markets, security of privately owned property and rule of law. It analyses the policies and institutions of 159 countries and territories based on 2014 data.

Overall, Algeria slipped to the 151st position with a score of 5.15/10 behind Iran and ahead of Chad.

Algeria showed poor scores in key components of the report. In terms of the size of government, Algeria ranked 157th, while it came in the 154th position in the freedom to trade internationally category. The same poor performance was noted in the categories of legal system and property rights (106th) and access to sound money (113th).

Morocco ranked 118th scoring 6.42. It came in the 100th position in terms of the size of government, 53rd in the legal system and property rights category, 100th in terms of access to sound money and 115th in the freedom to trade internationally.

Tunisia posted a comparatively better performance ranking 108th with an overall score of 6.54. In the report sub-categories, it ranked as follows: 99th in the size of government, 69th in the legal system and property rights, 77th in the freedom to trade internationally. Yet, in the category of access to sound money, Tunisia was outperformed by Morocco and Algeria as it came in the 125th position.

The Fraser Institute produces the annual Economic Freedom of the World report in cooperation with the Economic Freedom Network, a group of independent research and educational institutes in nearly 100 nations and territories.

The Fraser Institute is an independent Canadian public policy research and educational organization with offices in Vancouver, Calgary, Toronto, and Montreal and ties to a global network of think-tanks in 87 countries.