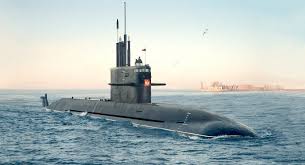 Morocco, Russia Close to Reaching a Deal on Amur-Class Submarine

Negotiations are underway between Morocco and Russia on the delivery of the Amur-class 1650 super-quite submarine, which will be the Kingdom’s first submarine, Moroccan press reported.

The Amur-1650 diesel-electric powered submarine will significantly boost Morocco’s capabilities as it will carry Club cruise missiles in addition to featuring air-independent propulsion (AIP). With a length of 66.8 meters and a beam of 7.1 meters, the submarine can sink into a depth of 250 meters.

Morocco, a usual customer of western military equipment, is also interested in strengthening its air defense capabilities with the purchase of Russia’s SU-34 tactical bombers.

If the deal is struck, it would mark a shift in Morocco’s armament strategy, as the Kingdom seeks to diversify suppliers and to acquire advanced Russian equipment to boost its defenses. The deal would also add a fresh momentum to bilateral relations following a successful visit by King Mohammed VI to Russia in March 2016.

As for Moscow, the success of its air campaign in Syria gave Russian arms producers an edge in the international weapons market and offered them new opportunities in North Africa and the Middle East.

Russia has long been the world’s second largest arms exporter after the US, with an average annual income in 2012−15 reaching 14.5 billion dollars.

North Africa Post's news desk is composed of journalists and editors, who are constantly working to provide new and accurate stories to NAP readers.
NEWER POSTAlgeria Lags Far Behind in ‘Economic Freedom of the World’ Ranking
OLDER POSTConfidence Crisis Brews between Algeria and Europe over Counter-Terrorism