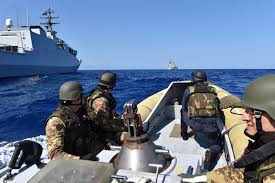 The Moroccan navy took part in the naval exercise, Sea Border 2016, in the Gulf of Taranto in Italy on September 5-9.

On this occasion, Morocco sent patrol vessel OPV-70 dubbed, Bir Anzarane, which made an outstanding performance during the joint naval exercise that brought together naval forces from the north and south of the Mediterranean, le360.ma said.

The joint naval drills, part of the 5+5 initiative, aims at boosting the exchange of expertise between the navies of western Mediterranean countries with a view to safeguarding maritime security against any potential threats and boosting interoperability.

Besides the Moroccan navy, the Italian, Portuguese, French, Maltese, Mauritanian and Tunisian navy took part in the exercise.

Morocco’s naval vessel OPV-70 was named after the Bir Anzarane battle which marked a victory of the Royal Armed Forces over the Algerian-backed Polisario separatists in 1979.

The OPV-70 is an Offshore Patrol Vessel of the Royal Moroccan Navy, designed by Raidco Marine and built at STX France SA. Its main tasks include surveillance of Moroccan EEZ and control of fisheries in the Atlantic ocean, with secondary roles including detecting illegal immigration, smuggling and drug trafficking as well as supporting counter terrorism and search and rescue patrols along Moroccan coast.