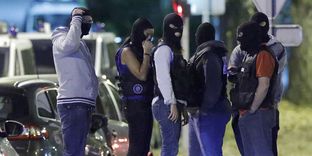 French interior Minister Bernard Cazeneuve Thursday announced the arrest of three women allegedly connected to a car found with six gas canisters and suspected to plot a terror attack against a train station.

The women were arrested in front of a building at Boussy-Saint-Antoine, some 30 km southeast of Paris. The three militants hired an apartment in the building they used as a hideout, according to the interior ministry

One of the women, Ines, aged 19 was reportedly shot in the ankle and thigh after she hurled at one security officer with a knife upon seeing the police car in front of the building.

Police reports further revealed that when searching the hideout, the police squad came across a will signed by one of the three women pledging allegiance to the Islamic State group.

The three suspects have been connected to a car bomb found in Paris on Saturday, in front of a bar, not far from Notre-Dame Cathedral.

The car bomb contained six gas canisters; five of which were full. The canisters according to the interior ministry were not equipped with any detonator or firing device.

Investigations carried out by police led to the owner of the car who was Ines’s father. The father had earlier on contacted police to notify Ines’s disappearance, suspecting that she ran away to Syria. Ines has been on police radar since 2015 for attempts to join IS in Syria.

The three IS sympathizers were plotting several eminent attacks, mainly an attack against a train station. They were police noted waiting to a go-ahead order from an IS official operating in Syria or Iraq.

Police suspects the female militants received order to avenge the death of IS spokesman Abou Mohammed Al-Adnani killed in a raid in Syria.

Four other people have been arrested in connection with the car bomb.