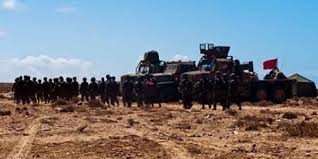 Tensions have flared in the area after the Polisario sent troops to the buffer strip near Guerguarat where Morocco was paving a road after a police operation against smugglers in the area.

“The situation remains tense in the Guergarat area” said the UN Spokersman Stephane Dujarric, adding that “any resumption of hostilities, with the potential to have wider regional implications, remains of significant concern to the UN.”

The UN is “actively engaging with the parties and key member states to urge restraint and identify options for an acceptable solution to the current crisis,” Dujarric said.

The Polisario protested against the security operation launched by the Moroccan police and customs authorities against smugglers who turned the area of Guergarat to a venue for engaging in all sorts of illegal cross-border commercial activities.

Earlier in August, the UN mission to the Sahara, MINURSO, has refuted the Polisario’s failed attempt to portray Morocco’s security operation as a breach of the ceasefire saying that the anti-smuggling operation in Guergarat had a police character and was undertaken in coordination with the UN.

In 2007, Morocco put forward the autonomy initiative after the organization of a referendum proved to be unfeasible in view of disagreements over who is eligible to vote. Morocco offers the autonomy initiative, which has been internationally endorsed as a credible solution, as a basis for negotiations. The autonomy plan offers the Sahara exclusive powers with regards to managing local affairs within the framework of Morocco’s sovereignty and territorial integrity.

North Africa Post's news desk is composed of journalists and editors, who are constantly working to provide new and accurate stories to NAP readers.
NEWER POSTEuropean Parliament sees Morocco as ‘Bulwark’ Against Terrorism in Mediterranean
OLDER POSTMorocco: US Alerts Rabat & Madrid over Looming IS Terror Attacks