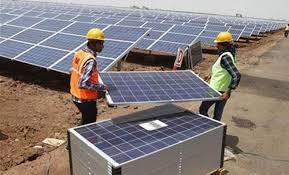 The U.S. Agency for International Development (USAID) has announced support for a research in Morocco on the integration of solar energy microgrid into ‘smart buildings’ in partnership with National Instruments.

The Moroccan solar energy research is among the 49 final projects selected by the USAID Global Development Lab from over 650 worldwide scientific proposals.

The selected research projects will be funded through the Partnerships for Enhanced Engagement in Research (PEER.) The solar microgrid system is designed to operate in two modes; Grid-Interactive and Islanded mode. In grid-interactive mode the battery system operates in parallel with the PV system.

The PV system operates normally as a typical grid-tied solar PV system. During peak sun hours of the day, the battery system is less active, but when the PV system is not utilizing the majority of the inverter capacity (i.e. at night) it is able to actively participate in fast response frequency regulation.

The control system is designed to always prioritize the use of the inverter capacity for the solar PV generation first, then the remainder is utilized for frequency regulation participation.

The system adjusts automatically from a grid-tied current source to an islanded voltage source in a few cycles. The PV system will continue to produce electricity as long as there is sufficient sunlight to generate and sufficient load or battery capacity to absorb it.

The integration of this technology in smart buildings is the goal of the research in Morocco supported by the USAID. According to the findings of experts, the energy consumption for buildings accounts for 40 pc of the energy used worldwide.

It has become a widely-accepted fact that measures and changes in the building modus operandi can yield substantial energy savings minimizing the buildings’ carbon footprint.

Moreover, buildings in the near future should be able to produce the amount of energy they consume, i.e., become zero or nearly zero energy buildings (ZEBs). This is a mandatory requirement based on the fact that by 31 December 2020, all new buildings shall be nearly zero-energy consumption buildings. New buildings operated or owned by public authorities shall comply with the same criteria by 31 December 2018.

Integrating solar microgrids in smart buildings offers optimized energy efficiency. USAID says it is committed to support the development of renewable energies and low-emission economies around the world.