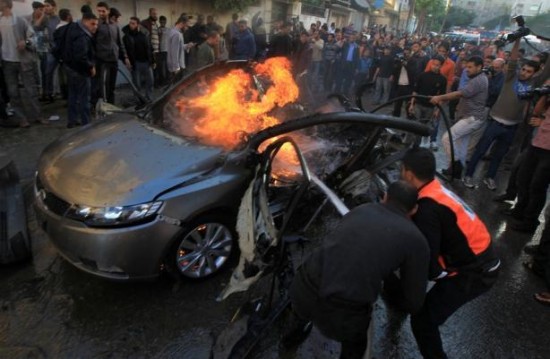 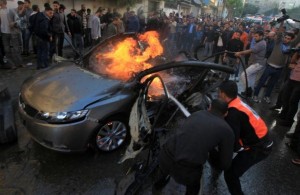 Egypt has recalled its newly appointed ambassador to Israel, Atef Mohamed Salem, after the commander of Hamas military wing, Ahmed Al-Jaabari. was killed in an Israeli raid on Gaza strip.
The announcement was made Wednesday evening by a presidential spokesman in a televised statement.
The spokesman said that President Mohamed Morsi has also summoned the Israeli ambassador in Cairo to convey Egypt’s rejection of continued Israeli attacks on Gaza and called the Arab League general-secretary to convene Arab foreign ministers for an emergency meeting.
Israel on Wednesday escalated its air raids on Gaza killing besides Al-Jaabari a dozen other Palestinians.
Egyptian authorities on the other hand decided to open the Rafah border crossing to enable rescue teams to transfer injured Palestinians to Al-Arish General Hospital.
Meanwhile, hundreds of Egyptians took to the streets in Cairo to denounce the Israeli airstrikes and voice solidarity with Gaza.
Several Egyptian political forces called for the mass protests, including the Muslim Brotherhood, and a number of Palestine solidarity activists took part in the demonstrations.
While most Arab and Muslim countries have condemned Israel and urged it to end its airstrikes on the Gaza Strip immediately and to stop killing innocent civilians, the United States, Canada and other western states have expressed support to Israel, and underscored, as put by the US State Department, “Israel’s right to defend itself”. “Attacking Israel on a near daily basis does nothing to help Palestinians in Gaza or to move the Palestinian people any closer to achieving self determination,” the State Department said in a statement.
On Thursday, Hamas leaders said they were not considering a truce with Israel as Israeli planes were still striking Gaza. “We will not be exposed to further tricks by the occupation. We consider talk of a truce at this time an attempt to provide more cover for the continuation of the escalation on Gaza,” Hamas spokesman Sami Abu Zuhri was quoted by the media as saying at a press conference.
Late Wednesday, the UN Security Council held a two-hour closed emergency meeting on the situation in Gaza at the request of Morocco, a SC member, and Egypt.
The Council heard reports by the Israeli and Palestinian representatives and discussed the situation, calling for restraint and end of violence.
The UN Secretary General had earlier said that he strongly condemned rocket fire from Gaza and that he was expecting a “weighed” response from Israel, “not to provoke a new cycle of bloodshed that could result in more casualties among the civilian population.”
Ban Ki-moon had urged both sides to exercise “maximum restraint and to respect international law.”
The calls do not seem to have been heeded however as Israel is even considering the possibility to launch a ground operation into Gaza and as Palestinian forces are said to continue launching rockets into southern Israel.

North Africa Post's news desk is composed of journalists and editors, who are constantly working to provide new and accurate stories to NAP readers.
NEWER POSTDSK affair, when journalists lose their soul
OLDER POSTEU Approves about €5 billion worth of Economic, Political Assistance to Egypt