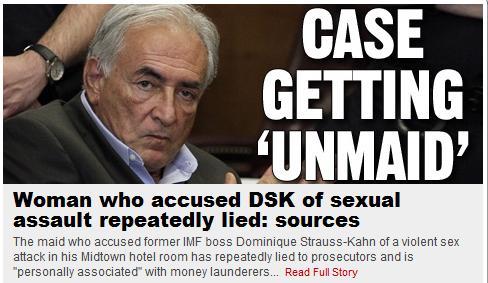 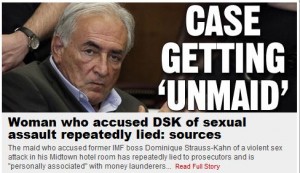 Nowadays, as prosecution and conviction determine the importance of a story, we are forced to accept the media line. The Strauss-Kahn affair shows how, by way of justice/journalism, the accused was left to the lions.
In May 2011, we were the involuntary witnesses of the ex-Head of IMF’s bankruptcy [Destruction? Character assassination?]. Only a few hours after his arrest, the cover of the Daily News declared him as “Le Perv”. Soon followed by “DSK made a hooker take care of guest on the side » and “Indicted but he will go free today”(New York Post).
Handcuffed, the French politician makes the front page of more than 150 000 daily papers in a few days. The media coverage is even bigger than for President Obama’s election in 2008. DSK becomes the target. We scan, we methodically rummage through his life, until finally, the audience knows the colour of his socks. Every minute and trivial detail is newsworthy. Courts did not even open a hearing but the Kafkian trial had already started. Of all information in circulation, only a few tell the ‘truth’. For newspapers it is about finding the catchiest title, vulgar, popular. The battle rages, with the search for every woeful detail.
Despite it being a fundamental duty of a journalist to “forbid oneself to libel and accuse without legitimacy” (Journalists Charter), the media raged. Forgetting about truth they preferred sensation and profitability. The man is knocked down. He is ousted. His wife leaves him. With the impact of new technology, he becomes an international pariah.
But do not worry, he is still alive! We are free to continue our casual charges, protected by the sacrosanct right of freedom of expression. The first amendment of the American constitution gives the privilege to some to forget about the duties of their vocation for a bigger wallet.
Too bad that at his discharge, with no case to answer, quills were less inspired.
That U.S judges found the litigant untrustworthy will not win back his wife.
Or restore his dignity. Little front page coverage, a far cry from the stormy beginnings.
A last homage though, to the fickleness of our colleagues. A rose, on the grave of our ethics, killed by the sharp lines of pen pushers. And, of course, goodbye to the man, Dominique Strauss-Kahn. No praise could ever bring him back to the public scene.