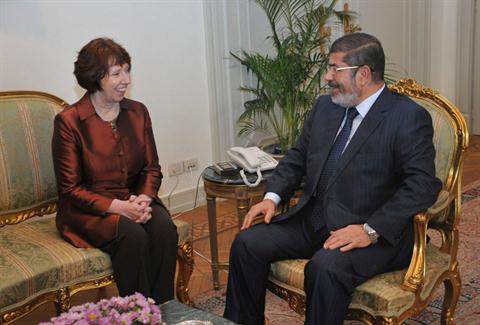 EU Approves about €5 billion worth of Economic, Political Assistance to Egypt 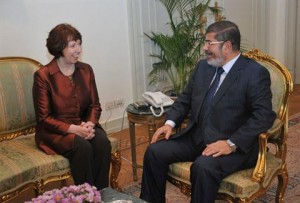 The European Union has agreed to extend Egypt nearly €5 billion economic and political assistance to help the country cope with the transition phase it is going through.
The decision was made on Wednesday during the EU-Egypt Task Force, the largest-ever meeting between the European Union and Egypt.
The economic and political assistance package will be in the form of loans and grants for 2012-2013, announced the EU Neighbourhood Info center.
“In support of the ongoing democratic transformation, Egypt and the EU will work together to overcome the socio-economic challenges, thus setting an example for the region and beyond,” said the Task Force co-chairs, EU High Representative Catherine Ashton and Egyptian Foreign Minister Kamel Amr, at the end of the two-day meeting.
The meeting discussions focused on commercial ties, economic cooperation, tourism, political reform, asset recovery, human rights, infrastructure and information technology.
Three financing agreements were signed between the EU and Egypt covering SMEs in rural areas, extension of the Cairo Metro and measures to boost trade.
On the sidelines of the Task Force meeting, Commission Vice-President Antonio Tajani organised a business and tourism summit, which attracted more than 100 European business leaders, representing companies with a combined turnover of €600 billion.
The EU Special representative for Human Rights, Stavros Lambrinidis, on his part hosted more than 40 civil society organisations, while Members of the European Parliament who were part of the visiting delegation met with members of Egypt’s upper house (the Shoura Council) and of the Constituent Assembly, tasked with drafting Egypt’s constitution.
According to the EU Neighbourhood Info center, the European Investment Bank (EIB) which will provide up to €2 billion over the next two years signed already a first tranche of €200 million of the €600 million loan approved by the Bank for the extension of the Cairo Metro and a loan of €45 million for the Community Development Programme.
The European Union committed to provide additional financial support to Egypt worth nearly €800 million for 2012-2013 (€303 million in grants and €450 million in loans). This is on top of the €449 million already provided for the period 2011-13.
The European Bank for Reconstruction and Development confirmed the start of operations in Egypt and announced plans for lending the North African country up to €1 billion per year.

North Africa Post's news desk is composed of journalists and editors, who are constantly working to provide new and accurate stories to NAP readers.
NEWER POSTEgypt Recalls Ambassador from Israel after Hamas Commander Assassination
OLDER POSTO Maghreb: Where Art Thou… in US Foreign Policy?