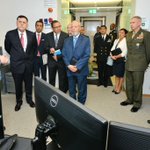 Libya’s nominal Prime Minister Faiez Serraj called, during a visit to US-Africa Command in Stuttgart, for more US military assistance to Libya beyond the cooperation in the fight against the Islamic State (IS) group in the city of Sirte, media reported on Thursday.

The US, since August 1, has been supporting Libya’s UN-backed Government of National Accord (GNA) in the campaign against the IS group in Muammar Gaddafi’s hometown of Sirte. The US Africa Command says it has launched more than 70 airstrikes against the terrorist group.

Serraj visited the command centre in the Germany city of Stuttgart on Wednesday. He was accompanied by political adviser Al-Sinni and the chief of Security Preparations Commission, Al-Taweel. US ambassador to Libya Jonathan Winer attended Serraj’s talks with the Head of the Command Center, Thomas D. Waldhauser.

Serraj expressed wish that after IS defeat in Sirte, the US would cooperate with his country in sharing military expertise and intelligence and in training Libyan forces.

“Libya would like to receive the US military expertise and training for the forces in the country so as to build a strong army. We would like to cooperate with the US in the information exchange regarding any terrorist acts in the region,” Al-Serraj said.

His call received a positive nod from the Head of the Command Center who reaffirmed the US determination to help Libya take control of its territory.