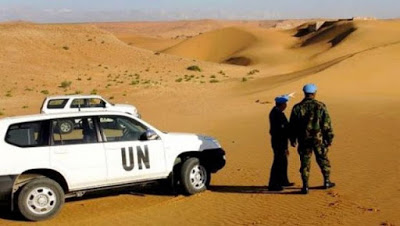 The UN Spokesperson has categorically refuted the allegations propagated by the Polisario and Algerian media saying that Morocco mobilizes troops in preparation for a breach of the 1990 cease fire agreement in the southern provinces, the Sahara.

In a desperate attempt, the Polisario claimed that the launch by Morocco’s security forces of a combing operation to clear the extreme southern tip of the kingdom from smugglers and illegal commercial activities is a military operation violating the UN-brokered cease-fire.

Speaking in a press briefing, Farhan Haq the Deputy Spokesperson for the UN Secretary General dealt a severe blow to the Polisario when he made it clear that the UN did not register any cease-fire violation.

“On 16 and 17 August, the United Nations Mission for the Referendum in Western Sahara, MINURSO, deployed ground and air capabilities to investigate allegations of violations in the southwestern part of Western Sahara near Mauritania. MINURSO has not observed military presence or equipment in the buffer strip,” Haq told reporters.

These statements vindicate Morocco, which announced in an interior Ministry statement that the operation was led by security services in coordination with customs authorities to clear the southernmost tip of the country of smugglers and illegal commercial activities that offer propitious conditions for the enrichment of criminal networks.

The deployment of Moroccan security forces beyond the security wall or the berm was seen by the polisario as a threat because it seeks desperately to label the buffer zone- between the wall and the Mauritanian and Algerian borders- as a “liberated area.”

Several Moroccan media outlets reported that Morocco informed the UN and Nouakchott of the combing operation which enabled the dismantlement of several meeting points where smugglers engage in different sorts of trafficking and illegal trade.