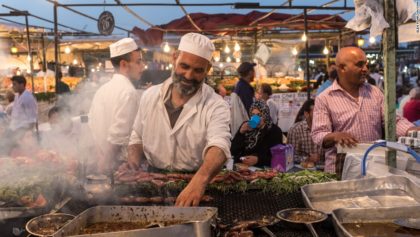 Marrakesh is no doubt a global must-see city for its delicacies, glamorous restaurants and culture. U.S network channel CNN has confirmed the reputation, ranking the town among the world’s top 23 cities for street food.

CNN African food and travel reporter, Anna Koblanck is one of millions of foreign travelers who do not resist the inviting smells filling the square after creative cooks set up their stalls at sunset.

“Smells of food fill the streets of Moroccan cities, and nowhere is the quality or diversity greater than in Marrakesh,” comments Anna Koblanck who labels Marrakesh as “the street food capital of Morocco, offering everything from camel spleen kebabs to deep-fried sesame cookies.”

“In the evenings, the city gathers among snake charmers and musicians at the Jemaa el-Fnaa square to taste the incredible spread of Moroccan delicacies that are on offer from the street stalls,” she says, adding, “You’ll find everything from freshly squeezed fruit juices to snail soup and sheep heads. It’s a full-on feast for all the senses, and not particularly pricey.”

Though Marrakech stands out as Morocco’s main cuisine destination, Koblanck also talks about the good food tradition and culture in other Moroccan cities where the quality or diversity is not to be ignored.

“My favorite Moroccan street snack is the Meloui, a kind of pancake made of folded pastry that you buy hot off the stove.

“I had one in the market in Fes that was made with a spicy onion-based filling that was simply divine. It’s a very heartwarming bite, a sort of comfort street food. You see these sold everywhere in Morocco, often in the food markets,” she says.