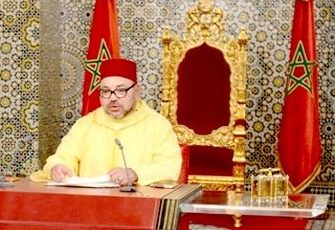 The Person of the King Should not be Involved in Electoral, Party Disputes 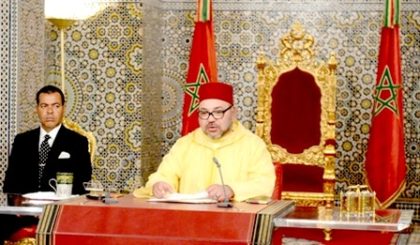 King Mohammed VI has urged all political actors, candidates and parties not to involve the King in any electoral or party disputes, as the King has a special status in the country’s political system.

“The King has a special status in our political system. All actors, candidates and parties should therefore avoid involving the King in any electoral or party rows,” said the monarch in the Throne day speech he delivered on Saturday.
“As the guarantor of respect for the Constitution, the smooth running of institutions and the safeguard of the democratic choice, I do not take part in polls, nor do I belong to any political party. I am the King of all Moroccans – candidates and voters – and also of those who do not vote,” he pointed out.
“Furthermore, I am the King of all political organizations, without any discrimination or exception. As I said previously: the only party I am proud to belong to is Morocco,” the monarch insisted.
The Sovereign who recalled the thorough political reforms and major economic and human development projects, which have reshaped the country over the past 17 years, conceded that “there is still much more to do, particularly as we are entering a new era, starting with the upcoming parliamentary elections.
“It is a watershed moment when we put things back on track: turn the page of an era when political parties used elections to gain access to power and inaugurate an era when this power lies with citizens, who have the duty to choose their representatives and hold them to account,” he said

He insisted in this vein that “citizens are the core element in the electoral process, not the parties, nor the candidates.”
“Citizens are the source of power, which they delegate to their representatives. They have the power to hold them to account and replace them, on the basis of what they have achieved during their mandate,” the monarch said, urging “voters to act in good conscience and to have in mind the citizens’ and nation’s interest during the poll, regardless of considerations of any kind.”

“I also call on political parties to endorse representatives who meet the requirements of competence, integrity, responsibility and keenness to serve citizens,” he went on to say, urging political parties, whether in the Government or in the opposition, to engage in fair competition, the ultimate goal being to find tangible solutions to citizens’ real issues and problems and calling on the institutions overseeing the electoral process to make sure this process is fair and transparent.

The King further deplored that some parties indulge in practices that are contrary to the ethics and ideals of political action, making statements and using expressions that tarnish the reputation of the nation and the credibility and sanctity of institutions, in their attempt to gain voters’ support.

“As soon as election dates draw near, confusion reigns, people turn their backs on each other and everyone, government and parties, candidates and voters, lose their minds and create chaos and conflicts that have nothing to do with the process of free choice, which is incarnated by elections,” he stated urging ruling parties and the opposition to “stop using the nation to settle personal accounts or achieve strictly party-related purposes.”