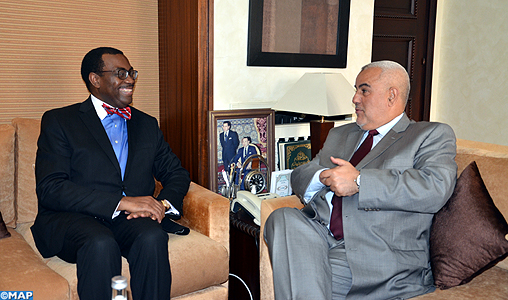 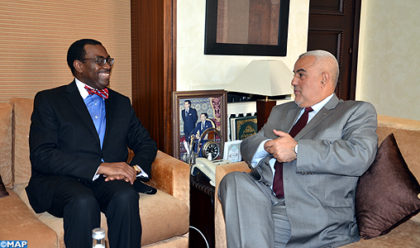 The African Development Bank (AfDB) commended Morocco’s commitment to economic development in Africa, saying that the Kingdom gears 85% of its foreign direct investments to the continent.

In a statement issued following the visit of the AfDB President Akinwumi Adesina to Morocco last week, the Bank described the Kingdom as “one of AfDB’s best performing portfolios on the continent.”

The Bank highlighted Morocco’s economic experience as a model in Africa as evidenced by its endeavor to become an export-oriented economy. In this regards, AfDB noted that Morocco is the third largest exporter in Africa after Egypt and South Africa.

The statement underscored the convergence of views between the AfDB and Morocco, particularly around 4 of the Bank’s High 5 priorities: “Lighting up and powering Africa”, as witnessed by the great progress Morocco has made in the last 20 years in regard to electrical connections; “Feeding Africa”, echoed in the Moroccan Green Plan, which focuses on the development of agriculture and agri-business (and thanks to which the impact of this year’s serious drought was greatly reduced); Industrializing Africa, met by Morocco’s industrial strategy; and Integrating Africa.”

The visit by the Bank’s President was also an occasion to express support for Morocco’s organization of COP22, which will take place in November 2016 in Marrakech.

“AfDB, which is already financing the extension of Marrakesh airport, is co-organizing the Africa Pavilion and working very closely with the Moroccan authorities throughout the preparations for this event on African soil,” said the statement.

On future cooperation prospects with Morocco, the statement pointed out to the proposals concerning the joint creation with Morocco of a private equity fund to boost investment in agriculture in Africa.

North Africa Post's news desk is composed of journalists and editors, who are constantly working to provide new and accurate stories to NAP readers.
NEWER POSTFrance Warns its Citizens against Visiting Algeria
OLDER POSTAlgeria: 40 per cent cut in number of foreign workers at in Salah Gas