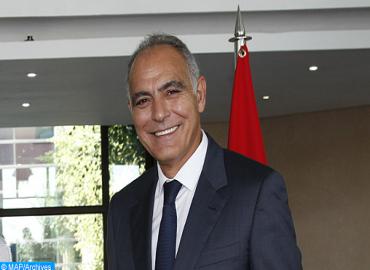 Morocco on Course to Fill Empty Seat at the African Union

Morocco’s Foreign Minister Salaheddine Mezouar is on an African tour to step up diplomatic ties with a host of African nations in a bid to pave the way for a return of Morocco to its empty Seat at the African Union ahead of its upcoming summit in Rwanda, Moroccan Media reported on July 14.

A diplomatic source that requested not to be named told Akhbar Al Yaoum Daily newspaper that Morocco is preparing to fill its empty seat at the 27th African Union’s summit scheduled on July 17-18 in Kigali.

The paper added that Mezouar handed, during his African trips, messages from King Mohammed VI to several African heads of state concerning a return of Morocco to the pan-African organization conditioned on the withdrawal of the membership of the self-proclaimed SADR republic of the Algerian-backed Polisario front.

The withdrawal of SADR membership is expected to be subject to a vote during the upcoming summit.

According to the same diplomatic source, the Moroccan Monarch may attend the summit. This will represent a ground-breaking event departing from the tradition of sending the Foreign Ministers to hold talks on the sidelines of the African event.

During his visit to Sudan, Mezouar made it clear that Morocco’s friends in Africa are demanding the return of the Kingdom to the African Union. He said Morocco will promptly respond to such a call once the conditions for reintegration are met.

The Minister said that despite its withdrawal 32 years ago from the predecessor of the African Union, the Organisation of African Unity, Morocco spares no effort to strengthen ties with countries in the continent.

Earlier in June, Rwanda’s President, whose country will host the next African summit, was given a Royal reception in Morocco. The visit was interpreted as a diplomatic headway by Morocco in its attempt to regain its seat in the pan-African body.

Morocco withdrew from the Organisation of African Unity in 1984 on grounds of the biased decision of the organization, which violated neutrality in the Sahara conflict by admitting the Algeria-based SADR separatist entity as a full-fledged member. Since then Morocco has been conditioning its return to the pan-African body on the withdrawal of the Polisario membership and the respect of the UN-brokered process to settle the Sahara issue.