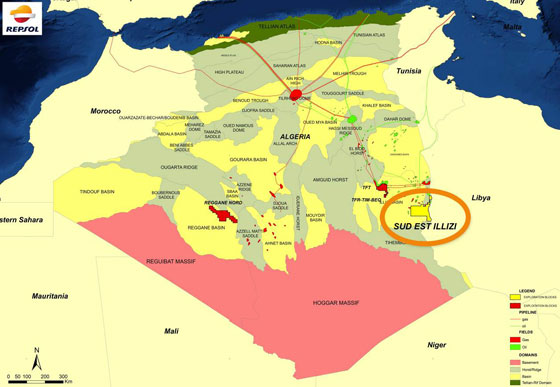 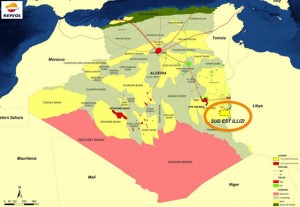 Spain’s oil company Repsol has discovered lately gas in the Illizi basin, in the south east of Algeria. The discovery was made during an exploration campaign launched in 2011 at the Tihalatine South-1 well in the Sud-Est Illize block.
A consortium led by Repsol won in 2010an exploration license to dig for oil and gas  at the Sud-Est Illizi block. Repsol is the operator of the consortium, with a 25.72 pc stake, partnered by Enel SpA (13.47 pc) and GDF Suez (9.8 pc). The remaining 51 pc is held by Algerian State-owned Company Sonatrach.
The discovery was made at a depth of 1,073 meters and preliminary testing produced gas flows of 105,000 m³/day. The Repsol-led consortium is planning to drill four more wells part of its exploratory program in the area.
Repsol is a global energy company present in more than 30 countries in the world. It has set foot in Algeria in 1973 and progressively increased its presence in the country. Currently, Repsol is involved in two producing projects (Issaouane and Tin Fouye Tabankort), a development project (North Reggane) and an exploratory project (Sud Est Illizi) awarded in 2010.
Repsol currently produces around 50,000 barrels of oil equivalent per day in the North of Africa.
According to some energy analysts, consumption of crude is expected to rise steadily in Algeria at an average annual growth rate of 3.35% between 2011 and 2021. This is in line with the projected GDP growth rate, although we expect energy intensity to increase towards the end of the 10-year forecast period.
Gas output is also expected to increase from an estimated 85.00bn cubic metres (bcm) in 2011 to 142.42bcm by 2021, as ambitious new projects, mostly located in the Ahnet, Berkine and Illizi basins have been  launched. Production will be further boosted by increased output at major fields such as Hassi R’mel and by enhanced recovery rates at the In Salah Gas Project.
Gas demand is also set to rise steadily with an average annual growth of 5.36 pc from 2011 to 2021. For its part, consumption is expected to go up from an estimated 30.26bcm in 2011 to 51.18bcm in 2021.