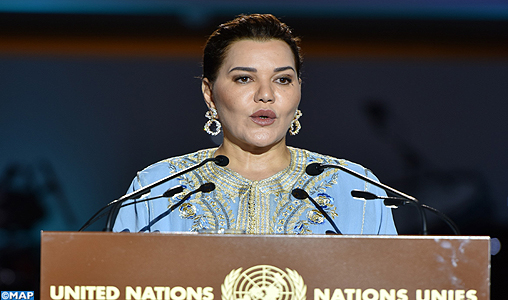 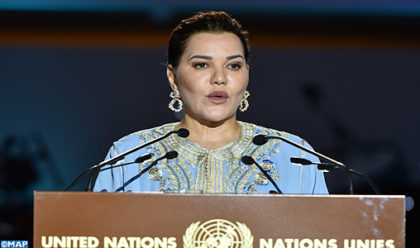 Morocco has called for consolidating humanism, mutual understanding, mutual respect and tolerance in the Mediterranean, a meeting point of cultures and civilizations and an area that played such a decisive part in the history of mankind.
“The Mediterranean must become, once again, an area of lasting peace and shared prosperity. It should, once again, stand for sharing, mutual respect, tolerance and diversity,” said King Mohammed VI in a message read out on his behalf at the first Mediterranean Concert, held at the Geneva Palace of Nations on Saturday, at the initiative of Morocco, the United Nations and the ONUART Foundation.

“We must reassert our human values and restore the greatness and splendor of the Mediterranean,” the Sovereign said in the message that was read out by his youngest sister, Princess Lalla Hasna.

“To celebrate the Mediterranean is to celebrate Humanity and the ideals of peace, tolerance, justice, equality and liberty that are enshrined in the United Nations Charter and the Universal Declaration of Human Rights,” he underscored.
the King went on to say that in order “to face up the fear-mongers and isolationists who feed on extremist ideologies, we must show courage and resolve in order to talk to one another, listen to each other, understand and accept each other, and act together for the sake of all we have in common.”

Yet, the Sovereign conceded that there are many perilous fault lines in the Mediterranean, ranging, he said, “from the much desired but constantly postponed peace in the Middle East, the upsurge in violence, terrorism, extremism and inward-looking, isolationist attitudes, the migration tragedies, the management of common resources and environmental protection.”
For King Mohammed VI “holding this concert today in the tragic, deteriorating environment prevailing in the Mediterranean provides an opportunity to celebrate, if only momentarily, our most exhilarating values – those of humanism, tolerance, freedom, dignity and mutual respect.”
Underlining the role artists have to play to make sure that the legacy inherited from the Mediterranean remains alive; that interaction with the Mediterranean is peaceful and refined, King Mohammed VI said, “more than ever, it will be incumbent on us to embrace our Mediterranean identity and to reclaim the spirit of the Mediterranean thanks to which that sea has played such a decisive part in the history of mankind.”
The Sovereign expressed hope that “Mediterranean countries will embrace the Mediterranean Concert and similar cultural initiatives by mobilizing their thinkers and their artists to face up the proponents of reclusiveness, intolerance and extremism,” and stressed the need “to reclaim the Mediterranean as a meeting point of cultures and civilizations.”

Several outstanding figures attending the concert have paid tribute to King Mohammed VI for his initiatives to promote understanding and dialogue between civilizations, particularly at the level of the Mediterranean.

The Mediterranean concert translates the North African country’s unwavering commitment to free the Mediterranean from the demons of intolerance, xenophobia, and rejection of the others, said the UN high representative for the Alliance of civilizations, Nasser Abdelaziz Al-Nasser.

He underlined Morocco’s role as a bridge between the East and the West at a time the region is challenged by hate rhetoric, blind violence and extremism.

Moratinos hailed the Moroccan King’s efforts to make of culture a leverage for dialogue, respect and tolerance in the Mediterranean area that is prey to war, misery and despair.