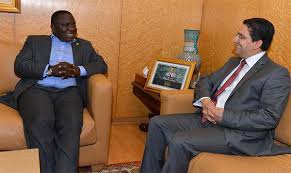 Zambia announced the withdrawal of its recognition of the Polisario’s self-proclaimed republic, the same day the separatist group announced the election of Algeria’s henchman Ibrahim Ghali as a new Secretary General and president of the auto-proclaimed SADR.

The decision was announced by Zambia’s Foreign Minister Harry Kalaba, who said, following talks with Moroccan officials in Rabat, that his country will withdraw recognition of the Polisario and severe all diplomatic ties with the Algeria-backed separatist group.

Zambia thus joins a host of African countries that revoked recognition of the “Sahrawi Arab Democratic Republic” (SADR), much to the despair of the Polisario and its mentor Algeria which has been using its oil bonanza to influence some African states and buy their support to the separatist thesis in the Sahara provinces.

This decision is of great significance as it was taken by a socialist-led government in Zambia which belongs to English speaking southern Africa, an area where Algeria and South Africa continue to put pressure in order to maintain support for the separatist groups, whereas Morocco has been more successful in gaining support from French speaking African countries.

Zambia’s support for Morocco’s territorial integrity comes at a pertinent moment as Lusaka prepares to take the rotating presidency of the African Union, turned by Polisario’s supporters, namely Algeria, Nigeria and South Africa into a stronghold to propagate the separatist thesis taking advantage of Morocco’s absence, after the Kingdom withdrew in 1984 from the then Organisation of African Unity on grounds of the lack of neutrality of the pan-African body which accepted the membership of a separatist entity.

While denying any involvement in the Sahara issue, Algeria paradoxically continues to fund and support diplomatically and militarily the Polisario militias which it hosts in the region of Tindouf since the early 1970s. The Polisario front has been using Algerian territories as a rear base for their guerilla warfare against Morocco until the UN-brokered ceasefire agreement in 1991. In 2007, Morocco put forward the autonomy initiative after the organization of a referendum proved to be unfeasible in view of disagreements over who is eligible to vote.

Morocco offers the autonomy initiative, which has been internationally endorsed as a credible solution, as a basis for negotiations by offering the Sahara exclusive powers with regards to managing local affairs within the framework of Morocco’s sovereignty and territorial integrity. Rounds of UN-brokered talks have not ended the stalemate. The Polisario and its mentor Algeria continue to stick to obsolete positions reminiscent of the Cold War era leading to the perpetuation of the conflict and thus prolonging the suffering of the Saharan population held in the Polisario-run camps in southwestern Algeria in a regional context marked by the surge of terrorism and all sorts of trafficking.