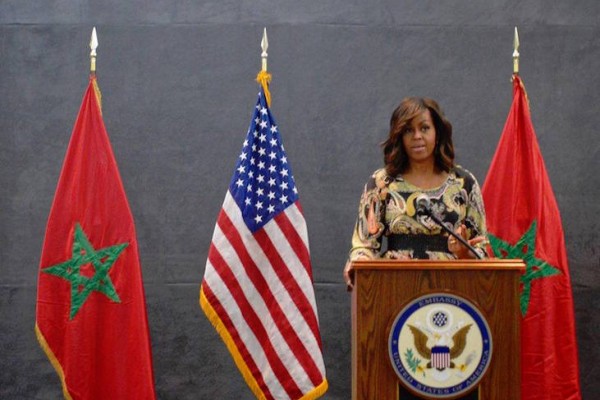 Morocco Made Huge Strides in Girls’ Education, U.S. Commits to Help in these Efforts, Michelle Obama 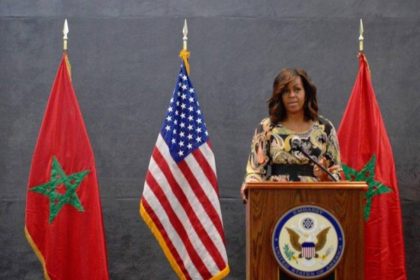 Morocco Made Huge Strides in Girls’ Education, U.S. Commits to Help in these Efforts, Michelle Obama
U.S. First Lady Michelle Obama who has just paid a two-day visit to Morocco underlined that the North African country has made “huge strides” in girls’ education and that nearly all Moroccan girls attend elementary school.
“Morocco has made huge strides in education, and nearly all girls there attend elementary school,” stated the First Lady in a commentary posted on CNN website on Friday, after her return home from a tour that led her to Liberia, Morocco and Spain.
Mrs. Obama however deplored the high number of girls in rural areas who drop out of school by the time they turn twelve, because they often live far from the nearest middle and high schools. “Right now, only 14 percent of girls in rural Morocco attend high school,” wrote the First Lady who visited the country to highlight the Let Girls Learn initiative she is spearheading.
She said the United States “will be working closely with the Moroccan government to help transform high schools across the country,” and “will be supporting new school dormitories to allow girls from rural areas to attend school far from home.
On the sidelines of the First Lady’s visit, the U.S. Government actually announced new programming in Morocco to help address the barriers that prevent girls’ access to an education.
In this vein, the Millennium Challenge Corporation (MCC) will earmark nearly $100 million investment in a new model for secondary education in Morocco, to benefit about 100,000 students, including 50,000 adolescent girls.
The USAID on its part announced a new $400,000 investment in a local NGO to establish five new girls’ dorms (known as “Dar Talibas”) to provide housing and support for rural girls to continue their education, while the White House announced that Morocco will become, in the coming months, Peace Corps’ 36th Let Girls Learn country.
“I am so proud that the U.S. is working with the Moroccan Government to make these transformative new investments to educate and empower girls across Morocco, the First Lady had said, according to a White House release. The investments “will help these girls succeed in the workforce and fulfill their boundless promise,” she said.
As she had done during her tour in the region, Mrs. Obama deplored in her commentary that right now, more than 62 million girls worldwide are not in school, a fact she described as “such a heartbreaking loss.”
In her plea for girls’ education, she wrote that “educating girls doesn’t just transform their life prospects — it transforms the prospects of their families, communities, and nations as well” and that “sending more girls to school and into the workforce can boost an entire country’s GDP.”
During her visit to Morocco, the First Lady, who was accompanied by her daughters and by actresses Meryl Streep and Indian Freida Pinto, was guest to an iftar (Ramadan supper) hosted in her honor by King Mohammed VI. The banquet was attended by the King’s Spouse and three sisters.
She participated in Marrakesh on June 28 in an exchange with adolescent girls on the issue of girls’ schooling.
In her commentary, Mrs. Obama promised to continue her work on behalf of these girls “not just for my final seven months as First Lady, but for the rest of my life.”