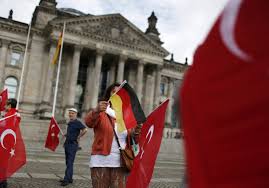 The German Bundestag on Thursday approved a non-binding resolution recognizing the 1915 massacre of the Armenians by the Ottoman Turkish forces as genocide with only one member of the parliament voting against it and another abstaining. Turkey reacted by recalling its ambassador in Berlin for consultations and also summoned Germany’s Chargé d’affaires in Ankara.

Turkey’s Justice Minister Bekir Bozdag lambasted Germany over the resolution saying, “first you burn the Jews in ovens and then you come and accuse the Turkish people of genocide.” “There is nothing that we can be ashamed of” when we look back at our history as Turks, he said.

Government officials in Germany are trying to calm down the situation after President Erdogan warned ahead of the vote that it would “seriously affect” bilateral ties. Chancellor Angela Merkel said “many things” connect the two countries and having “a different opinion regarding one particular issue” should not overshadow their “friendly and strategic partnership.” She renewed her government’s will to promote dialogue between Turkey and Armenia over the 1915 killings. Foreign minister Frank-Walter Steinmeier said Ankara reacted “as expected” after the resolution was passed but he expressed hope that the two governments “will succeed in the next days and weeks to avoid any overreaction.” Turkey was against the use of the word ‘genocide’ in the resolution.

The president of the Bundestag, Norbert Lammert, said dealing with “the dark chapters” of history is “painful” but “an honest self-criticism of the past doesn’t damage relationships with other countries” as he explained that “the Turkish government is not responsible for what happened 100 years ago, but it shares responsibility in what happens in the future.”

The nonbinding draft resolution states that Germany, an ally of the Ottoman Empire at the time, “bears partial responsibility for the events” that transpired.

Meanwhile, Armenia applauded the approval by the Bundestag and its foreign minister Edward Nalbandian described it as a “valuable contribution… to the universal fight for the prevention of genocides.” They claim that more than 1,5million Armenians were killed between 1915 and 1917 but Ankara puts the figures at between 300,000 and 500,000. Turkey claims that many Turks died in civil strife when Armenians rose up against their Ottoman rulers and sided with invading Russian troops.