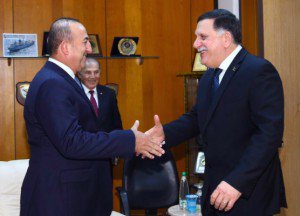 Turkey’s Foreign Minister said Monday during a visit to Tripoli that Ankara was willing to work with the Government of National Accord (GNA) in the reconstruction of the North African country.

“Turkey and Turkish companies will play an important role in meeting all of Libya’s needs,” Foreign Minister Mevlut Cavusoglu said.

Choosing Libya as his first visit, the newly reappointed Turkish top diplomat also indicated that Ankara is willing to be among the first countries to reopen its embassy in Libya. Many countries had pulled out their diplomatic staff in 2014 following growing security concerns in the Libyan capital.

The Turkish embassy is located near the Abu Sittah naval base where the GNA is headquartered temporarily.

At a joint press conference with Prime Minister-designate Faiez Serraj, Cavusoglu also addressed the thorny visa issue imposed on Libyans since August. Many Libyans have complained about the slow and long visa processing duration.

Cavusoglu told reporters that they had taken measures to make applications quick and friendly.

“We have given the appropriate instructions to our consulates … regarding the extension of Turkish visas to Libyans,” he said.

“We have begun e-visa applications and have authorized some private companies to begin granting visas.”

Cavusoglu is the latest high profile international figure to lend his support to Serraj and his GNA. Most western diplomats along with Arab League foreign ministers have pledged to back the GNA still struggling to impose its authority in the war-torn country two months after arriving in the capital.

Prime Minister Serraj arrived by sea in Tripoli, late March with his team following many failed attempts. The GNA took control of key ministries but it is still weak due to lack of official recognition by the internationally recognized parliament; the House of Representative (HoR) based in Tobruk.

The GNA is facing another rival government affiliated to the HoR, which has refused to recognize it as Libya’s sole legitimate government.