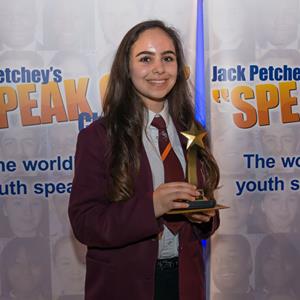 A Palestinian young refugee pupil has been denied stage performance at a public speaking competition after organizers had been bullied to bar her.

15 years old Leanne Mohamed who is attending Wanstead High School could not compete for Jack Petchey Speak Out Challenge Grand Final after her speech “Birds not Bombs” was judged inflammatory and offending.

She previously won London Speak Out Challenge. In her speech, Leanne Mohamed reportedly talked about the everyday agony of Palestinians since 1948 and how the Palestinians, even children, are discriminated against because of their nationality.

She also took aim at the Israeli bombings and incursions in Palestinian territories.

Edgar Davidson, a Pro-Israel blogger complained to Jack Petchey Foundation [organizer of the challenge] arguing that the young girl’s speech was full of lies and it was regrettable that the organizers supported “hateful and vicious political propaganda.”

The Foundation bowed down to Davidson’s complaints, censored the young Palestinian by crossing her off the list of competitors, and suspended the video of her speech.