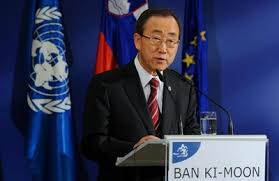 South Korea’s Ban Ki-moon, the outgoing Secretary General of the United Nations, has been described by the Economist as “the dullest—and among the worst” UN chiefs that preceded him.

In a recent story on the job of UN Secretary General, described as “something of a poisoned chalice” and on the candidates to the UN helm, the influential British magazine stated that Ban Ki-moon “is painfully ineloquent, addicted to protocol and lacking in spontaneity and depth.”

Touching on ban’s missteps during his Maghreb tour last March, the magazine pointed out that “Even after nine years in the job he is apt to stumble, most recently by calling Morocco’s presence in Western Sahara ‘an occupation’.”

“Overall, Ban personifies the defect to which the UN is prone: plumping for the lowest common denominator. He got the job because none of the permanent members of the Security Council—America, Britain, China, France and Russia—found him too objectionable. China wanted an Asian; America regarded him as broadly in its camp; Russia found him acceptably nondescript,” the Economist wrote, adding that the UN looks set to repeat the same error when Ban steps down by the end of this year.

The secretary-general is also the UN’s “chief administrative officer.” In this respect, too, under Mr Ban it has floundered, the weekly wrote, recalling that Anthony Banbury, a long-serving American UN official, penned a tale of woe in the New York Times soon after he had retired in disgust in March. It was failing, he wrote, “thanks to colossal mismanagement.”

In Ban’s defense, the weekly deems that “he is decent and dogged” and that he can claim some credit for new development goals set last year and for overseeing a climate-change agreement in Paris in December.

In South Korea, where Ban Ki-Moon is eyeing the presidential elections of 2017, the Korea Times newspaper reproduced the British magazine’s story under the title: Ban Ki-Moon, one of the worst secretaries-general of the UN.