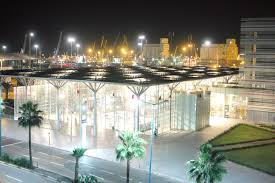 Two Moroccan projects are vying for the 2016 Aga Khan Award for Architecture. The ‘’Casa-Port New Railway Station’’ and the ‘’Guelmim School of Technology’’ are among the 19 projects shortlisted by the master jury from amongst 348 projects nominated for the $1 million prize.

The selected projects are now undergoing rigorous investigations by on-site reviewers – architects, conservation specialists or structural engineers themselves – who visit and evaluate each project first-hand.

The ‘’Casa-Port New Railway Station’’ has been designed to handle up to 25 million passenger trips per year in the future. This hub includes a shopping center, an underground car park and an office building. The architecture of the station is characterized by its hypostyle roof, a wide canopy of wood and steel extending beyond the facades, while the upper part is split into eight branches to filter sunlight through the skylight.

The Guelmim Technology School has also captured the attention of the selection committee of the Aga Khan award. The architecture of this educational complex is boldly contemporary but inspired by its context. the building main facade has been painted with ochre, blending with the landscape and the town.

The Aga Khan award for architecture is different from other architecture prizes. It selects projects – from slum upgrading to high rise “green” buildings – that not only show architectural excellence but also improve the overall quality of life.

The prize rewards architects and recognizes the contributions made by builders, master craftsmen and engineers who have played important roles in a project.

The Award was established by Aga Khan in 1977 to encourage building concepts that successfully address the needs and aspirations of communities in which Muslims have a significant presence. It recognizes architectural excellence in the fields of contemporary design, social housing, community improvement and development, historic preservation, reuse and area conservation, as well as landscape design and improvement of the environment.

Over the years, several Moroccan projects received the prestigious Aga Khan Award for Architecture. In 2013, the Hassan II Bridge (2011) linking Rabat and Salé was among the winners.

Linking Rabat and sale to form an urban hub, the Hassan II Bridge and its associated access works relieve both cities’ historic sites and populations of atmospheric and sound pollution, the jury had said. The design respects the overwhelming horizontality of the built and natural environments, allowing Rabat’s 12th-century Hassan Tower to retain its vertical dominance of the skyline. The concrete supports, in subtly varying arced forms, are deliberately delicate and lace-like in appearance. Besides providing transport connections, the structure also offers an urban roof over the alluvial plain of the Bouregreg River, creating a protected public space for markets and leisure activities.