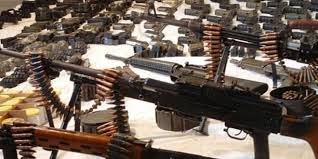 The Tunisian Interior Ministry Tuesday announced security forces found a cache of weapons and ammunition in the town of Ben Guerdane, lying at the border with neighboring Libya.

The cache included 29 Kalashnikov, 3 RPG rocket launchers and 130 machine guns, the ministry said in a statement. The security forces also found boxes for 9,520 cartridges for Kalashnikov chargers as well as several thousands of rounds of ammunition.

The statement further revealed that the discovery of the cache was made possible thanks to tips by one of the terrorists arrested in a raid at Mnihla, a suburb of the capital Tunis.

On May 11, Tunisian security forces foiled terrorist attacks after they raided a house at Mnihla where terrorist militants were planning attacks on the capital.

Two terrorists were killed and several were arrested in the raid.

Ben Guerdane was theater of several days of fighting between Tunisian security forces and militants in March.

The town, dubbed “Tunisia’s Derna” as it houses an important number of IS sympathizer, is also known for smuggling activities between Tunisia and Libya.