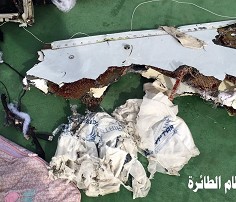 Egyptian forensic department chief Tuesday denied claims that an explosion brought down the EgyptAir plane which crashed last Thursday in the Mediterranean.

“Everything published about this matter is completely false, and mere assumptions that did not come from the forensics authority,” Hesham Abdelhamid was quoted as saying.

Abdelhamid debunked a report by one Egyptian official involved in the investigations of the doomed plane. The official had said “given the fact that small parts of human remains were recovered, there are greater chances that the plane exploded mid-air.”

The official had told the Associated Press under condition of anonymity that there could be only one explanation of the crash.

“The logical explanation is that an explosion brought it down,” he said. “There isn’t even a whole body part, like an arm or a head,” he added.

“But I cannot say what caused the blast.”

Relatives of the victims arrived at Cairo morgue and gave DNA evidences to identify the 66 people killed in the crash.

Previous reports indicated that the plane caught fire before crashing but experts said that might be due to a technical snag.

The doomed flight traveling from Paris to Cairo disappeared from radar 40 minutes before landing. It was around 16 km into Egyptian airspace before it crashed into the Mediterranean.