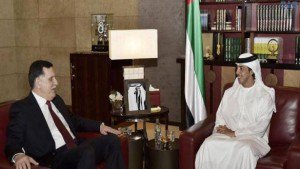 The UAE is allegedly providing military support to HoR-backed Libyan National Army, headed by self-style Khalifa Hafter who has been vehemently opposed to the Government of National Accord (GNA.)

In a statement issued following the meeting between the two ministers, Abu Dhabi called for the implementation of the LPA which vests the GNA with power only after the HoR, known as the country’s legitimate legislature, endorses it.

Prime Minister serraj early last week called on his cabinet members to take office even though HoR has not confirmed them.

Since arriving in Tripoli few weeks ago, the GNA has been struggling to assert its power in the capital and across the country. It has taken control of several ministries including the ministry of foreign affairs.

Sheikh Mansour called on Libya to shore up its unity and restore its security.

Some 25 countries including the US last week pledged to ease the arms embargo imposed on the country since 2011 in a move to help the GNA acquire necessary military equipment to fight IS.