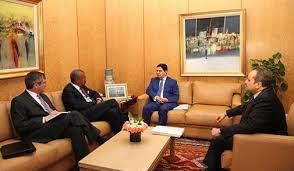 Moroccan diplomacy continues to show its anger and express its utter rejection of the contents of the latest report issued by the US Department on the situation of human rights in the North African country.

Apparently, tension has not eased between the two sides. US ambassador Dwight Bush was summoned by the Moroccan Foreign Affairs Ministry in Rabat where the American diplomat met with minister-delegate for Foreign Affairs Nasser Bourita in the presence of Mohamed Yassine Mansouri, Head of the Moroccan Intelligence agency.

During the meeting with the US ambassador, the Moroccan officials raised three specific cases cited in the State Department report, proving “manipulation and blatant factual errors.”

The first case concerns Ms Ouafae Charaf. In its report, the State Department claims she was sentenced to two years in prison for “making false allegations of torture” and “reporting crimes”, while investigation showed the woman tells lies.

The second case is that of Osama Housn. The US State Department report says he was sentenced to 3 years in prison for “making false allegations of torture” and “reporting crimes while he was aware of their inexistence.”

But investigation has proven beyond any doubt that his allegations were false as one of his friend said the defendant was with her at the time he claimed he was kidnapped.

The Moroccan officials also raised the case of Hamid Mahdaoui. According to the report of the US State Department, “on June 29, a Casablanca court sentenced Mahdaoui Hamid, news editor of BADIL website, to suspended four-months sentence for defamation of Head of National Police (DGSN) Abdellatif Hammouchi.”

These allegations are false because Mr. Hammouchi was not director of National Police at the time, says the Moroccan Foreign Affairs statement, stressing that it was the Head of National police at that time Bouchaib Rmil who filed a complaint against Mahdaoui for false reporting and for “slanderous denunciation.”

Besides these three specific cases, Moroccan authorities say they have undeniable proofs regarding other cases and wonder about the real motivations behind citing unfounded cases in the State Department report, a move which risks only to undermine and strain the relationship between two allies and friend countries for centuries.