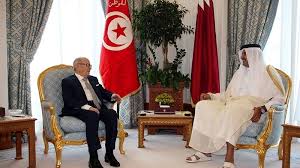 Doha proposed the organization of an international conference to relaunch Tunisia’s battered economy, which has been affected since the 2011 revolution.

The proposal was made on Wednesday by Emir Tamim Ben Hamad Al Thani during during talks with visiting Tunisian President Caid Essebsi.

Even though the venue of conference was not announced, reports say it may be held in October.

The conference will seek to gather the investments necessary to implement the large-scale projects planned under Tunisia’s five-year development plan.

Tunisia’s economy has severely suffered from the 2011 revolution. The situation has gone worst since last year following three terrorist attacks which have left more 70 people dead, among whom more than 50 foreign tourists.

Economy experts put last year’s economic growth at less than 1 per cent but forecasts for 2016 say growth may reach 2 per cent.

The Tunisian Government, which claims it does not have a magic wand, is also facing growing unemployment rate. Unemployment rate has been estimated at 15 per cent of the total population (11 million) with more than 600,000 young graduates still on the dole.