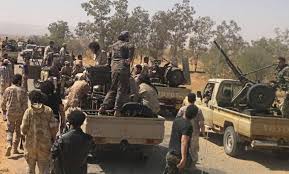 Prime Minister Abdullah al-Thinni of the Tobruk-based government that used to be widely referred to as the internationally recognized government before the Libyan Political Agreement (LPA) was signed has stressed it would not hand over power to the unity government until it obtains the confidence of the House of Representatives and that of the international community.”

He reiterated that his government will continue to exercise its “external and domestic functions with all necessary powers and capabilities” and blasted countries that sent government officials and diplomats to meet the unity government for trying to “impose a new reality aimed at undermining the sovereignty of the Libyan state” with actions “contrary to diplomatic norms and ethics.”

The Tobruk-based government had enjoyed international recognition when it was engaged in a power struggle with the Tripoli-based National Salvation Government which forced it out of the capital.

Meanwhile, a delegation from Tobruk led by Deputy Presidents of the House of Representatives (HoR,) Emhemed Shouaib and Ehmeed Homa, met with prime minister-designate of the unity government and head of the Presidency Council (PC) Fayez Serraj in Tripoli.

According to the PC, a new initiative was proposed by HoR members from southern Libya who were also part of the delegation with regards to the vote of confidence without going into details. It said the meeting was part of means to finding a “mechanism” to reach “a high level of national consensus” and “means of enabling the HoR in its role as the legislative authority” of the country. Observers think that the meeting showcases that the two institutions share at least a certain level of recognition for each other but formal recognition at the parliament could continue to be blocked.

The fate of Khalifa Haftar, General Commander of the Libyan National Army loyal to Tobruk, remains a major stumbling block in the approval of the LPA and the unity government. Haftar, one of the most influential people in the Tobruk-based government, has reportedly turned down a recent request by special envoy Kobler to meet him.

On Sunday, Serraj urged the UN to lift the arms embargo on Libya because, he said, “it doesn’t make sense that the international community supports our war against terrorism, and forbids us from arming ourselves.” The Libyan people were suffering and needed both arms and assets to battle the extremist Islamic state group, he said.