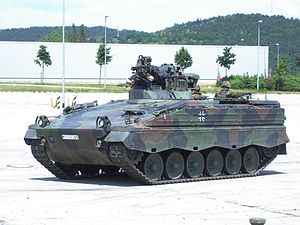 German is set to offer a double digit military package to Tunisia to help it bolster security at its border with Libya in the fight against IS militants.

German media “Der Spiegel” reported on Friday, without indicating sources, the sum will be used to buy “armoured personnel carriers” to improve national forces fight against extremists at the Libyan border.

The sum estimated at €10 million, it said to be part of a 100 million euro fund to strengthen partner states south of the European Union with crisis prevention, reports say.

Germany had earlier this year offered Tunisia military aid including electronic equipment to the Tunisian army to help it combat the illegal crossing by IS militants into Tunisia via Libya.

A couple of months later, a lone Tunisian believed trained in Libya, mowed down 38 people at a Sousse resort hotel in June.

In November, a suicide bomber also said trained in IS training camps in Libya killed 12 members of Tunisian presidential guard.
The army has been on the alert to ward off crossings by IS militants across the border with Libya. Authorities have built a wall along the Libyan order and dug trenches filled with water and equipped with electronic detectors to deter crossings.