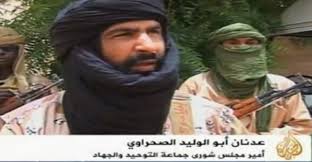 Islamist militant Abu Walid Al-Sahrawi, a member of the so-called People’s Army of Sahrawi Liberation (military branch of the polisario secessionist movement) who joined the terror organization ISIS, has threatened to attack MINURSO and foreign tourists in Sahara.

In an audio recording aired by Al Jazeera, Abu Walid Al-Sahrawi has, for the first time, threatened overtly to attack members of the UN peacekeeping mission MINURSO.

The MINURSO currently maintains a limited presence in the Sahara after Moroccan government drastically reduced its civilian personnel in retaliation for comments made by UN Secretary General Ban Ki-moon.

The polisario extremist has also threatened Moroccan security forces, popular tourist destinations and foreign targets in the region. In the audio, Abu Walid Al-Sahrawi also called on Muslims living in Morocco to support the Islamic Caliphate.

“According to sources with access to the Algerian intelligence agency DGSE, the Bouteflika government reached a highly secret understanding with Belmokhtar after the kidnapping in April 2012 of the Algerian consul in GAO (Mali)”, reveals the e-mail.

“Under this agreement, Belmokhtar concentrated his operations in Mali, and occasionally, with the encouragement of DGSE, attack Moroccan interests in Western Sahara, where the Algerians have territorial claims,” stresses the message made public by Wikileaks.

In 2011, an Italian and two Spanish aid workers were abducted from Tindouf camps, wherein Sahrawis are sequestered in Southern Algeria, and over the following years several polisario fighters were reported to have taken part in the militant Islamist advances in Mali. Top security experts have warned against the threat and collusion of the polisario fighters with Islamist extremist groups operating in the Sahel.

According to J. Peter Pham, director of the Washington–based think tank Atlantic Council’s Africa Center, the polisario should accept the Moroccan offer of autonomy, because an independent state would not be viable. “The last thing Africa needs is another failed state, and that’s exactly what Western Sahara would become if Morocco left,” he says.

“There are no real natural resources which can be commercially exploited, it would never be viable by itself. An independent Western Sahara would be an even bigger breeding ground for terrorists.”

The Moroccans are waging tireless war against Islamic extremists and fanatics as shown by the numerous ISIS cells disrupted in the country.

According to newly set up Central Bureau of Judicial Investigation (BCIJ), dubbed Morocco’s FBI, 35 deadly terror plots were foiled last year and 155 terror cells were dismantled since 2002. But BCIJ cautions that there is no zero risk in the field as the terror threat is still hovering.

Morocco’s counter-terrorism strategy has so far yielded positive results recognized worldwide. Intelligence sharing combined with regional and international cooperation are the key of success in the field.

At a time a growing number of European and African countries are reaching out to Moroccans to benefit from their security experience, their Algerian neighbors are unfortunately still refusing to join in to round up regional common security threats.

Sadly, they are also rebuffing calls to open up their land borders with Morocco, a move which encourages illegal traffickers to flourish while home-grown terrorists are thriving in Tindouf camps, posing great risk for the stability of the region. So when will the Algerians listen to the voice of reason?