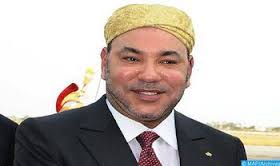 Morocco’s King Renews Pledge to Make of Sahara a Hub for Interaction between Africa, Europe

King Mohammed VI has renewed the pledge to make of the Moroccan Sahara provinces a hub for trade and human interaction between Africa and Europe and a bridge between Morocco and its African roots.

This came in a message he addressed on Wednesday to the first African Congress on maintenance, preservation of road assets and technical innovation, taking place in Marrakech.

The Sovereign who expounded the special development agenda Morocco is pursuing and the major infrastructure projects it is building, and which can serve as a lever for economic take-off and as a means to enhance the country’s competitiveness and attractiveness, renewed his keenness “to turn the Moroccan Sahara into a hub for trade and human interaction between Africa and Europe.”
He also reiterated Morocco’s commitment “to share with African countries the significant expertise it has gained over the years in the area of road maintenance and to exchange best practices with sister nations in this field.”
The King recalled in this respect that the Moroccan strategic plan on the development and modernization of the road network for the next 20 years attaches great importance to road asset preservation. Nearly 50% of the plan’s overall investment figure is devoted to maintenance; significant funds will also go to the development of freeways and expressways and the rehabilitation of major roads, he said.
“Consistent with our integrated vision, this plan gives special importance to strategic connections with West Africa. The Moroccan southern provinces will thus constitute a bridge between Morocco and its African roots. Moreover, the construction of the Maghreb freeway, to the East, will continue in order to facilitate trade with neighboring countries.”
“These ambitious plans, together with major infrastructure and solar and wind energy projects, are not designed only for the development of the region. Through them, we hope to create closer bonds with African sister nations and contribute to their development as well,” King Mohammed VI said.