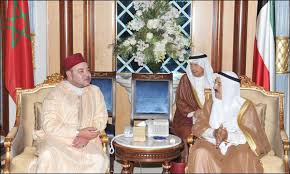 The latest historic visit made by King Mohammed VI to the Gulf region has yielded positive results at the strategic and security levels, and also at the financial scale.

The royal tour has prompted Kuwait to speed up its due financial contribution to Morocco within the frame of the GCC pledges made to the North African Kingdom and Jordan, two observer members of the Gulf regional grouping.

According to press reports, Kuwait has granted to Morocco $250 million. This contribution comes few days after King Mohammed VI took part at the 1st summit meeting held in Riyadh on April 20 between Morocco and the rich-oil members of the Gulf Cooperation Council gathering Saudi Arabia, Kuwait, the United Arab Emirates, Qatar, Bahrain and Oman.

The summit was convened at a time the Arab world and particularly the six member States of the GCC are facing huge security challenges and serious terror threats.

Relations between Morocco and Arab Gulf countries gained momentum thanks to the special ties King Mohammed VI has with all the Gulf leaders who invited, in 2011, the North African country to join the powerful regional group.

Jordan was also invited to the elite group in a move seeking to enhance joint Arab action to counter common regional and international threats.

In his speech before the Riyadh summit, King Mohammed VI had warned against the conspiracies seeking to destabilize the few countries, which have managed to safeguard their security, stability and political systems, saying he was referring to the Gulf countries, Morocco and Jordan.

These countries “are oases of peace and security for their citizens and a factor of stability in their respective regions,” the Sovereign had said.

“We are all facing the same perils, the same threats, though their origins and manifestations may differ. Therefore, to defend our security is not only a shared obligation, but it is also a collective, indivisible one,” the King had said, adding that “Morocco has always perceived the security and stability of Gulf countries as an intrinsic part of its own security and stability. What hurts you hurts us, and what affects us affects you.”

Although it is geographically remote from the hotspots rocking the Middle-East, Morocco has always supported Arab causes such as the Palestinian cause. King Mohammed VI is chairman of Al Quds Committee, the only body set up by the Organization of Islamic Cooperation (OIC) to defend the city and its holy sites.

Morocco’s diplomacy spearheaded by the Sovereign contributed to welding Arab ranks during the Arab Spring turmoil, enabling the Kingdom to expand its influence and gain new friends.

Morocco’s growing influence in the Arab world can thus be seen clearly in the Libyan crisis, as the Kingdom hosted the inter-Libyan talks that led to the adoption of the Libyan Political Agreement in December 2015.

Morocco’s role as a key partner was likewise evidenced in the Yemeni war as the North African country stood by its GCC allies to restore the legitimate government, overpowered by Iran-backed Houthi Shia militias.