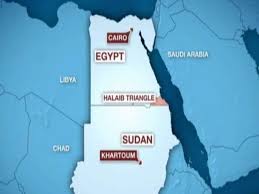 Egypt could soon be entangled in another round of territorial dispute with Sudan over the Halayed Triangle overlooking the Red Sea as Sudan’s Foreign minister Ibrahim Ghandour told the parliament that Khartoum has taken “necessary legal and political measures” to preserve its rights and sovereignty.

Sudan raised new concerns over the territory after Egypt and Saudi Arabia reached a maritime border agreement under which the Red Sea islands of Teran and Sanafir were handed over to Riyadh.

Sudan said it wants to review the agreement after it surfaced that the Halayed Triangle was recognized as an Egyptian territory by the document.

Ghandour, while acknowledging that the relationship between the two countries is “at its best,” stressed that they want “to figure out the impact” on their maritime borders because Sudan “wouldn’t abandon its national sovereignty.” Khartoum wants to take the dispute to international arbitration but Cairo has not encouraged such moves. Egypt settled the dispute over the Taba area with Israel at an international arbitration.

The Sudanese foreign ministry released a statement last month calling for direct negotiations in order to reach an agreement with Egypt as the latter has just done with Saudi Arabia.

The spokesperson of the Egyptian foreign ministry Ahmed Abu Zaid replied that “Halayed and Shalateen are Egyptian territories and fall under Egyptian sovereignty” and that “Egypt has no additional comment on the statement issued by the Sudanese foreign ministry.”

The dispute over the territory has been ongoing since 1958 but it has been under Egypt’s full military control from the mid 1990’s after Sudan has allegedly supported an assassination attempt on former president Hosni Mubarak.

There are reports that Egypt would soon begin the construction of its first court in Halayeb.

North Africa Post's news desk is composed of journalists and editors, who are constantly working to provide new and accurate stories to NAP readers.
NEWER POSTMorocco Gets $ 250 Million Financial Contribution from Kuwait
OLDER POSTSpain: Three Moroccans Arrested for Promoting IS