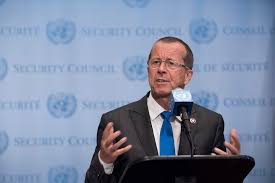 “I strongly deplore these terrible killings and call on those with authority on the ground in Bani Walid to ensure that the incidents are investigated and to prevent any further killings,” Kobler said.

The men were killed on Tuesday at Bani Walid, 150 km from Tripoli. The location is said to be controlled by militiamen loyal to the new unity government.

Another group of 14 migrants from other nationalities including Syrians were also killed, The New Arab reports.

Thousands of Egyptians live and work in Libya. IS last year in February aired a five-minute video showing the terrorist group beheading a group of Coptic Christians on the beach in its stronghold of Sirte.

The 21 victims were killed for their faith as the terrorists referred to them as the “people of the cross, followers of the hostile Egyptian Church.”

The Serbian government in a separate report announced Wednesday its citizen Miroslav Tomic abducted on Saturday was released.

“We have confirmed information he was released from captivity. We have been informed he will appear at his workplace tomorrow,” a Foreign Ministry spokeswoman said.

Tomic, a maintenance engineer has been working for a German company in Libya.

Libya descended into chaos since 2011 following the overthrow of the country’s ruler Muamar Gaddafi.