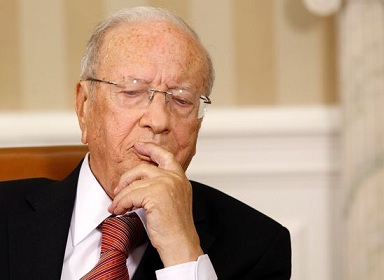 Tunisian President revealed that though he has been opposed to military action in Libya to help crash IS militants, he is for targeted air strikes against IS jihadists whose actions still pose a big threat to Tunisia’s stability.

Caid Essebsi told Italian paper La Stampa of his determination to combat IS which he said is not a religious movement but a political group seeking to seize power.

“Daech combatants are not Muslims and do not represent Islam,” Essebsi said.

Tunisia has borne the brunt of the chaos in Libya where the IS militants have taken refuge, setting up their training camps from where they launch attacks in the region.

Three terrorist attacks all of them claimed by IS hit the country last year killing dozens of people including foreign tourists.

Tunisian forces have been on alert as authorities struggle to stem the flow of IS militants across the lengthy and porous border between the country and Libya.

The border town of Ben Guerdane was theatre of clashes between militants and military forces early March. An army of jihadists attacked a military barrack and National Guards positions killing several military and civilian persons while more than 50 terrorists were also reportedly killed after several days of military push-backs.

Also In February more than 40 terrorists the majority of whom were Tunisians were killed in an US air raid in the town of Sabratha, West of Tripoli.

To combat the jihadist movement the Tunisian President argues that government should tackle it from cultural and social angles by creating jobs for youth and developing impoverished regions.

Re-iterating his support to the Libyan nominal Prime Minister Serraj, Essebsi indicated that it is urgent for Tunisia to see the Libyan unity government taking control of affairs and tackling issues because Tunisia was the most affected by the instability that followed the revolution.