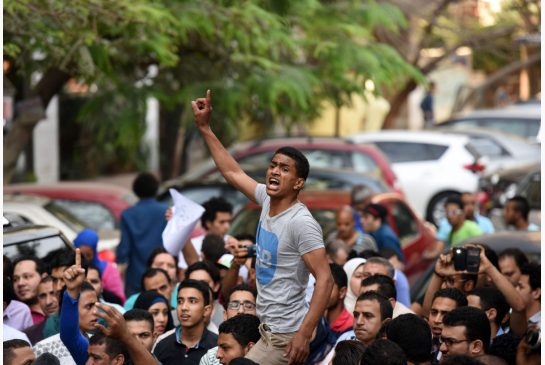 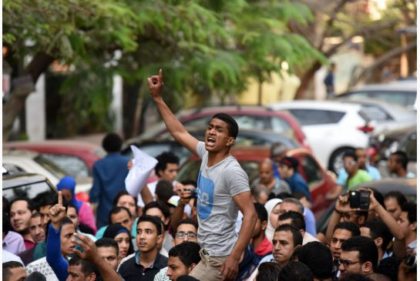 Hours before the start of the protest called for by leftists, seculars and Islamists, police forces took positions at strategic locations in the Egyptian capital and blocked access to the Tahrir square, the epicenter of 2011 protests.

The Dokki district was the scene of cat-and-mouse game between security forces and protestors who managed to hold gatherings into side streets.

Elsewhere at Mesaha square, a group of protesters estimated at 500 led by prominent pro-democracy activists managed to gather chanting the anti-al-Sis slogans. They were soon after dispersed by vans of security forces in full riot gear. The careered forces shot tear gas and birdshots and arrested several protesters.

According to press reports, 11 local and foreign journalists were arrested but were later on released. Only one journalist remained in custody.

The Monday protest was the second major demonstration since President al-Sisi came to power in 2014 after winning presidential election. On April 15, around 2,000 people took to the streets to condemn the secret maritime demarcation deal with Saudi Arabia relinquishing the Tiran and Sanafir strategic islands situated at the mouth of the Gulf of Aqaba off the coast of Sinai to Saudi Arabia as part of multi-billion-deals signed the Saudi king’s visit to Cairo earlier this month.

The cabinet said the islands belong to Saudi Arabia which in 1950 left them under Egypt’s protection for fear that Israel would attack them.

Millions of Egyptian criticized the deal accusing al-Sisi of selling off the islands for Saudi aid.