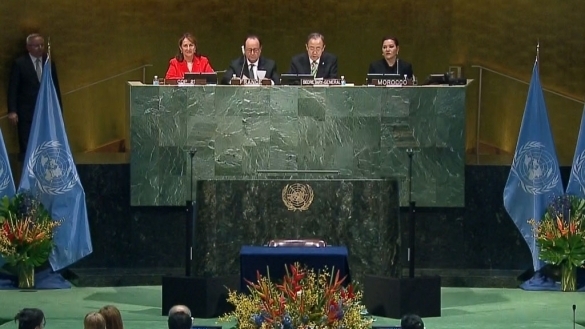 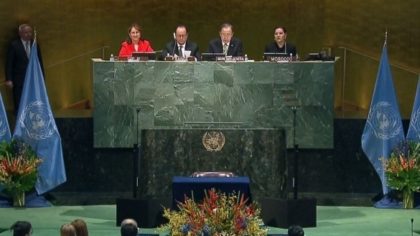 Morocco has called on the international community to pool efforts to implement all the provisions of the Paris Agreement on climate change and expressed hope for increased global awareness as to the need to combat the phenomenon.

The call was launched by King Mohammed VI in a speech delivered at the signing ceremony of the Paris climate agreement, hosted Friday at the United Nations Headquarters in New York.

“As we prepare for the COP22, which Morocco will have the honor of hosting in Marrakech, our collective efforts should focus on implementing the provisions of this comprehensive, balanced and equitable Agreement effectively,” said the king in the speech that was read out on his behalf by his youngest sister Princess Lalla Hasnaa, who is the chairwoman of the Mohammed VI Foundation for the Protection of the Environment.

“At the COP21, we managed to lay down the groundwork for a new, ambitious, solidarity-based climate order. The 2015 Paris Climate Conference thus paved the way for the low-carbon era,” the sovereign underlined.

King Mohammed VI who deemed that the negotiations on the implementation of the Paris Agreement “reflect and attest to the solidarity and spirit of responsibility shown by the international community,” urged all parties “to turn the pledges made in Paris into specific objectives, effective mechanisms and concrete projects so that our ambitions may become a tangible reality, for the sake of our planet and for the benefit of future generations.”
He also expressed hope that the COP22 to be hosted by Morocco next November 7 to 18 will be an opportunity to raise global awareness about the need for resolute, collective action to combat climate change.

He equally called for the adoption of procedures and mechanisms for the effective implementation of the Paris Agreement, including an action plan for the pre-2020 period for mitigation, adaptation, financing, capacity building, transparency and the transfer of technology, particularly for the benefit of developing countries and the least developed countries in Africa and Latin America, as well as Small Island Developing States.

“It is, therefore, important to agree on a clear, predictable, concrete roadmap to raise the funds needed to finance projects and thus foster the desired change in private investment patterns,” he said, insisting that in order to achieve the desired energy transition, “it is important to make sure countries benefit from the full range of incentives.”

After he underlined the need to impose carbon pricing and cover all key sectors, including insurance and maritime and air transport, King Mohammed VI said “solutions must be found to environmental trade barriers, and developing countries should be supported in their endeavors to diversify their economies and have access to patented technology on preferential terms.”

The king pledged that his country which is going to be among the first nations to sign the historic Paris Agreement on climate change will take the necessary measures to ratify the text as soon as possible.

He recalled that Morocco, to honor its climate change commitments, has initiated an integrated national policy to ensure environmental protection, tackle the effects of climate change and cut greenhouse gas (GHG) emissions by 32% by the year 2030. Part of this policy, Morocco adopted an array of initiatives to promote the green economy; enacted the National Environment Charter and the energy efficiency strategy and liberalized the renewable energy sector.

“As a result, my country has set even more ambitious goals for itself; we seek to meet 52% of our energy needs from renewable sources by 2030 thanks to major projects, particularly solar and wind farms,” said the Sovereign who underlined his country’s willingness “to share its know-how in this area through innovative partnerships, particularly with African and Middle-East countries.”