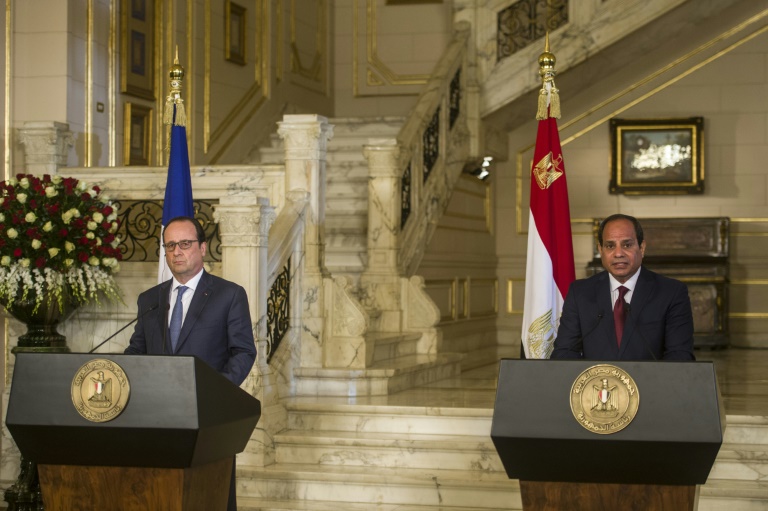 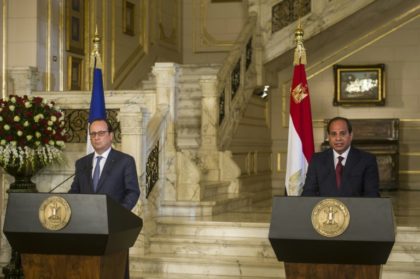 Visiting President Francois Hollande of France urged his Egyptian peer to respect human rights even though the country is being riddled with terrorist attacks.

Prior to his visit, rights groups lashed out at Hollande for his silence over the poor human rights record in Egypt which has tightened its control over rights groups and massacres basic human rights in its “fight against terrorism.”

At a joint news conference Sunday, dominated by questions on human rights abuses, President al-Sisi explained that his government was facing a tumultuous security situation requiring an urgent response.

“The region we live in is very turbulent,” he told his French guest.

President Hollande responded that respecting human rights was not an obstacle to the struggle against terrorism but it rather helps fight it.

“Human rights are not a constraint but also a way to fight terrorism,” Holland said.

Al-Sisi’s regime is also accused of the death in February of Italian PhD student Giulio Regeni whose body was covered with torture marks. Regeni’s death dealt a blow to ties between Egypt and Italy after Rome accused Cairo for failing to cooperate in the investigations to uncover the root cause of Regeni’s death. Rome this month recalled its envoy to Cairo to protest against Egyptian authorities’ lack of cooperation.

Asked about Regeni’s death, Sisi dismissed claims that the Italian student was killed by Egyptian security forces. Egypt was victim of the works of evil forces trying to bring down the state and its institutions, he said.

Regeni was last seen on January 25, marking the fifth anniversary of the Egyptian revolution. Egyptian authorities had then ramped up security level in the capital in a bid to prevent demonstrations called by political groups and activists to ouster al-Sisi.

Hollande’s two-day visit was marked by the signing of several economic and military agreements, including a $1.4 billion deal to cover the expansion of the metro line in Cairo. Arm deals worth $1.0 Billion are also in the pipeline after months of negotiations.

Egypt has turned to France and Russia to beef up its military capability, after Washington became warry of human rights abuses and scaled down its military cooperation in the wake of 2013 military coup.