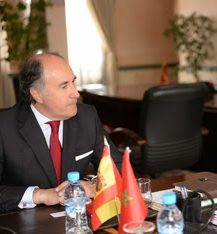 Mayor of Algeciras to Visit Morocco to Boost Economic Ties

Mayor of Algeciras, Jose Ignacio Landaluce, chairman of the senate Foreign Affairs and Cooperation Committee, is expected this Tuesday in Morocco to boost economic and commercial ties with the North African Kingdom.

During the visit, Mr. Jose Ignacio will meet with several Moroccans officials including foreign Affairs and cooperation minister Salaheddine Mezouar and speakers of the two Chambers of Moroccan Parliament Talbi Alami and Hakim Benchamach.

Bilateral trade between Morocco and Spain increased by nearly 11 pc during the period 2004-2014, compared with the total trade exchanges which increased by 9 pc.

Spain and France are Morocco’s biggest trade partners. Moroccan-Spanish relations constitute an important example of North‐South relations in the Mediterranean.

While economic relations between the two countries are competitive in certain areas, the broader picture is of complementary interests which are likely to grow as the development of these countries intensifies.

Many Spanish agricultural companies installed in Morocco due to lower labor costs and have gained competitive edge. Morocco is known internationally as one of the largest exporters of tomatoes and citrus.

Thanks to its political and economic stability, Morocco offers great investment opportunities for Spanish companies which are showing growing interest in the huge opportunities in the country.

Morocco offers Spanish businesses a gateway to other markets, mainly in Africa. It is also the first market in Africa for Spanish companies.

North Africa Post's news desk is composed of journalists and editors, who are constantly working to provide new and accurate stories to NAP readers.
NEWER POSTEgypt: Hollande Calls for Respect of Human Rights in Anti-Terror Fight
OLDER POSTUNSMIL Returns to Libya, HoR Due to Endorse GNA